Bunk, Harter, and Mark Lee all have ticker symbols that correspond with their initials.  A couple of years ago during a slow day at work I sent them snapshots of their companies.  What you see below is me looking at a chart and then trying to justify the price movement based on the life of whichever Mark it matches up to.  This is in no way investment advice and is purely for laughs (even if you don’t laugh). 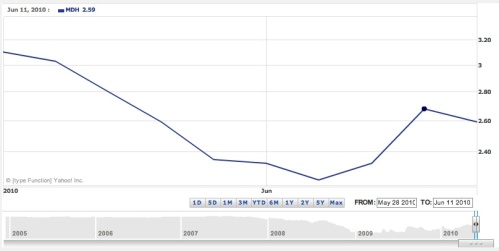 It’s like he’s sick of me calling him a roller coaster and was just like “fuck you, Blake, how’s this look?”

I decided to be nice and post (terribly) a chart of the Marks’ performance over the past 5 years.  Harter is in the biggest hole, but Bunk and Mark Lee are pretty much even.  (I’m too nice, otherwise I would have put the S&P 500′s performance in here.)

The Year In Review: