– Boxing: Andre Ward looked sharp against a tough opponent to look sharp against in Arthur Abraham on Saturday night. Ward won the Super Six semifinal by unanimous decision and awaits the winner of Carl Froch versus Glen Johnson on June 4th. (For those that don’t know, the Super Six is the super middleweight tournament that started up in 2009. Now you know.)

– Mythbusters: You can blow your own sail. Also, the sounds silencers make in movies can sometimes be the real thing, same with rattlesnake sounds. Explosions and punches, not so much.

– The future will not be televised: It will be paperized? Probably not what we’ll call it. Anyway, they are making some progress with electronic paper (again, since scientists can be lazy, it’ll be called e-paper) that should allow for your milk carton to tell you exactly when your milk is spoiled. You know, instead of the “hey, does this smell bad to you” test.  (Discovery)

– USS Ballin’: UNC will take on MSU on the deck of the USS Yet-to-be-named. I’ve heard of boxing matches and Cher concerts on aircraft carriers, but not college basketball.  (Wired)

– Space: I could explain what’s going on here, but that would be boring:  (New Scientist)

– Vampires cure strokes: Not really, but the saliva from a vampire bat can thin the blood clot caused by strokes.  (Geekologie)

– So now what? Offshore wind farms are causing “stress” to fish. Nature: we give up. Oil pollutes, coal pollutes and kills people digging for it in mines, getting natural gas out of shale taints our water, nuclear power scares the shit out of everyone, solar power is inefficient, and now wind farms kill birds and annoy fish. Awesome.  (New Scientist)

– Lab salt: Coming on your Lay’s potato chips in 2012. Pepsi (owner of Lay’s) has designed “15 micron salt”, which is saltier than salt, and that means less sodium, same saltiness.  (Gizmodo)

– How to cook unborn babies: Boing Boing has a few links to articles on how to best cook (and crack) eggs. (I know they aren’t fertilized so they really aren’t unborn babies… but still, think about it.)  (Boing Boing)

– Nanoflowers may return sight to blind: I have no way to summarize this in one sentence:

These flowers are not roses, tulips or columbines. They will be nanoflowers seeded from nano-sized particles of metals that grow, or self assemble, in a natural process — diffusion limited aggregation. They will be fractals that mimic and communicate efficiently with neurons.

Eye surgeons would implant these fractal devices within the eyes of blind patients, providing interface circuitry that would collect light captured by the retina and guide it with almost 100 percent efficiency to neurons for relay to the optic nerve to process vision.

How fucking futuristic is that shit? Nanotechnology is so many years from being a part of our regular lives, but damn. One day…  (Institute of Nanotechnology) 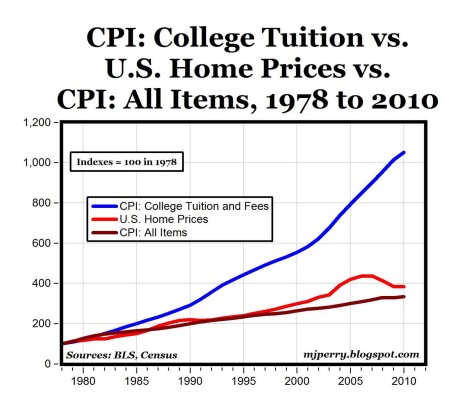 Hopefully it would just mean we’d stop putting such a stupid emphasis on college education, the price of which is summed up nicely by rapper J. Cole in “Home for the Holidays” (yes, that’s as white of a sentence you’ll see about rap):

We got into school, but who will pay our tuition man?

one year cost bout the same as a Mercedes,

four years cost a white crib and a baby.

Would love to hear what other people think would happen.  (Carpe Diem – for the chart, not the rap song)

– Remade Swiss Army knife: I missed this back in February when Core77 posted it, but Gizmodo just got around to it this week anyway. This knife is made from “surplus military horseshoe nails melted down and recast as knife scales, packaged in reclaimed original coated paper box that held the nails.” And it looks like this:  (Gizmodo)

– “Orgasms unlock altered consciousness”: Well, duh. A reporter got herself off in an MRI all in the name of science.  (New Scientist)