– Boxing: If you haven’t seen Nonito Donaire knock out Fernando Montiel, go here.  For some reason the ref let Montiel up, and quickly ends the fight after Donaire gets a couple quick shots in.  Max Kellerman puts Donaire as the number three pound-for-pound, saying “Floyd Mayweather, Manny Pacquiao, Nonito Donaire.”

– Street Heroin: Wired really wants you to know the ingredients of heroin.   (Wired)

– iPhone, the professional’s camera: Look at this shit hurr:  (Core77)

– Chocolate vaginas: What will the U of A think up next?  Go ahead and click that link to read an article devoid of sarcasm that doesn’t understand what’s so funny about chick’s screaming “chocolate vaginas”.  (The vaginas were sold for a good cause, naturally, but that gets kinda skewed when you expect dudes under the age of 60 to take “chocolate vaginas” seriously.  Fuck that, because I know my dad just chuckled at this paragraph.  NO dudes would take chocolate vaginas seriously.)  (Wooten – how the fuck did you scoop me on that one?)

– “Mancovery”: Dr. Mark J. Perry called the recent recession a “mancession”, since more men lost their jobs, at a higher rate, than woman.  More men unemployed would mean more men being hired during the recovery, hence “mancovery”.  Here’s the chart: 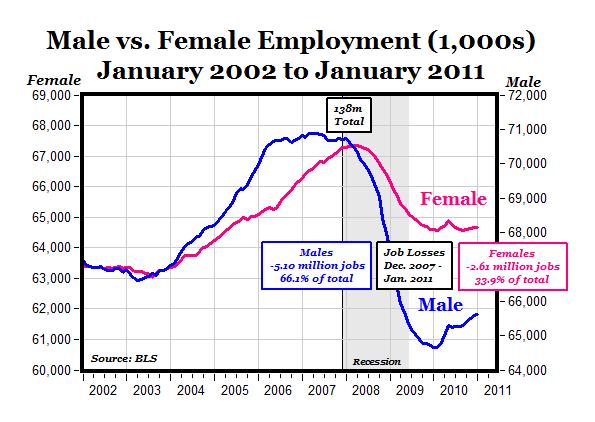 – Better than Decoded: Rapgenius.com is your hip-hop Wikipedia.  So they claim.  It’s just a better version of Jay-Z’s shitty book Decoded.  Each lyric is “defined” for you (or decoded, if you will).  For an example, let’s take the line from Lil Wayne’s “I Am Not a Human Being“:

Pop all the balloons and spit in the punch

That line gets broken down to:

“To put it bluntly, Lil Wayne likes to go down on, or “eat out” girls”

“Wayne will crash your party, basically”

(Insert “The More You Know” shooting star/rainbow here.)  In all seriousness, I just spent 20 minutes not writing this update and instead reading different lyrics.  The breakdowns can be funny.

– Amazing: If you tell me something is amazing, I’ll probably reply with “so amazing, so amazing, amazing, so amazing, baby baby.”  That’s because I recently picked up T.I.’s No Mercy (“eh” at best).  Listen to “Amazing” here (if you don’t listen with either good headphones with bass or a system with a sub-woofer, you won’t get why I like this song).  My favorite part is T.I.’s “OK!” in this section of the chorus:

Pharrell: Make her face fall off

And seriously, what the fuck are you going to do when your face falls off?

– Look out below: Need an avalanche?  Load up some artillery and let ‘er rip.  I think that’s what they are saying in the video, at least:  (Gizmodo)

– Unions: I have two quotes that sum up how I feel about public unions.  First up is Franklin Delano Roosevelt (crown prince of the left, no?) and his take on public unions from a letter he wrote to the National Federation of Federal Employees in 1937 (emphasis added):

All Government employees should realize that the process of collective bargaining, as usually understood, cannot be transplanted into the public service. It has its distinct and insurmountable limitations when applied to public personnel management. The very nature and purposes of Government make it impossible for administrative officials to represent fully or to bind the employer in mutual discussions with Government employee organizations. The employer is the whole people, who speak by means of laws enacted by their representatives in Congress. Accordingly, administrative officials and employees alike are governed and guided, and in many instances restricted, by laws which establish policies, procedures, or rules in personnel matters.

Read the rest of the letter here so you can see he also thought it immoral for government (he fucking capitalized the G, that’s how much he loved government) to strike.  You can’t tell me you only want to help the kids when you call in sick for four days, or whatever the fuck they are up to now (research, bitches), and don’t work.  Speaking of work, that leads me to my next quote.  This one from a teacher (supposedly) in Denver to a black republican (not named Nas or Jay-Z):

That’s your problem. You’re an entrepreneur, so you don’t work. You don’t know what work is until you get into an educational area.

“You don’t know what it’s like to have two weeks off at the end of December so you can actually travel for holidays!  You don’t know what’s it like to have the summer, weekends, nights, and major holidays off, while working for only 180 days of the year.  You lazy entrepreneur, you.”  That’s how she sounds to me, at least.  You can read about more incivility shown during the public unions’ protests here.  (To my friends that teach: not you.  But I do hope you understand your job is not a full-year job, so it’s kind of hard for you to claim full-year salaries.  If you disagree, then go ahead and bitch at me in the comments.  You never do anyway, so I’ll just take the win.)  (Coyote Blog – for the “you don’t work” quote)

– Wait, who’s dream is this bad? “Intellectual Dream Team of Arianna Huffington and David Brooks” do I need to continue that headline?  Anyway, those two lost a debate to P.J. O’Rourke and Zev Chafets.  Surprise.  (Best of the Web Today)

– Explosive farts: Scientists have found out that sheep can clean up “explosives-contaminated soil.”  They eat the grass and soil and absorb the residue of explosives.  It is completely harmless (um… so far?) and rather cheap.  Over/under on PETA flipping shit is set at two weeks.  Takers?  (Ben)

– How long is Bunk staying down there? A crazy lady in Collier County hit another woman with a board, a sign, and threatened her with scissors after the other woman gave the crazy lady’s kids thin mints from the Girl Scouts.  Aggressive.  (Dad)

– Oh, and HAPPY BIRTHDAY MOM! Probably not best to say happy birthday to your mom underneath a shot of titties… but would you expect anything less of me?

– New unis for the Bills: And about fucking time.  Those hideous monochromatic, dark blue unis will be gone next year, replaced by an OJ Simpson-era fauxback (a fake throwback, get it?) with white helmets.  (Uni Watch)

– Beer: The world’s strongest beer is selling in the UK for £55, however be careful: one gulp and you won’t be legal to drive.  Beer batter is better, now scientifically proven to make your meals tastier.  (The Daily What)

– Shaving helmet: If you rock a chrome-dome, this is the device for you:  (Gearlog)

– Tanzanian Commando: Watch this cute little fucker retell the classic tale of John Matrix and his quest to bring back his daughter, Jenny (played by a young Alyssa Milano).  (The Daily What)

– Knives: I know chefs are very particular about their cutlery (hell yeah I knew that word without looking… wait, does that word mean what I think it means?… yes), but I don’t know about the cutting ability of these badasses:  (Core77)

– Donnie Baseball: Pick this shirt up here:  (The World’s Best Ever)

– Outlawed farts: Does this read like a law that bans flatulence?:

Any person who vitiates the atmosphere in any place so as to make it noxious to the public to the health of persons in general dwelling or carrying on business in the neighbourhood or passing along a public way shall be guilty of a misdemeanour.

One lawyer, being all lawyery, claims it does.  Others say it’s an air pollution bill.  Either way, if you’re in Malawi, fart carefully.  (Wooten)

– Discrimination to fight discrimination: Ah, the good ol’ gender gap.  Wonder what changes in legislation we’ll get due to these recent figures:  (Carpe Diem)

– Really, women? This is what you do to yourself all day?  (Gizmodo)

– V-day Origins: Want to kick Valentine’s Day old school?  Cool, go get the goat to sacrifice and then turn around, baby, and take this lashing like you know it’ll make you fertile.  What?  I’m only using the hides of the goat we just killed.  Funny, never had that explained to me on a Hallmark card.  (The Daily What)

– Breakups to makeups: If you need to fix a heart, the U of A (ahem, THE University of Arizona) has come up with a new, more effective CPR.  Suck it, ASU:  (Dad)

– Guns: Look how destruction guns can be to a sheet of metal:

Sorry, that’s me being a dick because the artist, Walton Creel, is intending to “deweaponize” the gun.  In fact, his “main goal was to take the destructive power away from the gun.”  The series is called “Deweaponizing the Gun.”  (Look mom, a squirrel!)  (Core77)

– High speed is always better: This is a cool video:  (Gizmodo)

– Sexy links: Like girls with tats? Go here.  Like big asses?  Here.  Want to play “guess her muff”?  Here.  This Tumblr site just has good naked chicks and this Tumblr site is for bosoms.  Here’s a “bosom” sample:  (all links NSFW, all via Kissing Suzy Kolber)

– Yup, this is my father: At first I thought, “oh hell yeah, the dude smuggling drugs into prison via his foreskin is definitely the article to pick for this.”  Yeah, I’mma let that sink in.  OK.  But no, he tops that.  My dad sent an email to my work address with the subject “have a nice puke”, with one of those links that basically describe what you are going to see.  I clicked it anyway, because fuck it, and got a “SurfControl” block at work.  I responded to my dad by saying “probably the only SurfControl I’m thankful for.”  So what does he do?  Sends that link right to my Gmail, because dammit, son, you need to watch this chick stick her fingers down the back of her pants, then bring said fingers directly into her mouth.  Or as the title of the YouTube video says “poop muncher woman.3GP“.  (Wait, maybe it should have been the transsexual flight attendants for the Thai airline, PC Air.)  (Dad)

I won’t be posting a regular weekly update today.  That means it has been over a week since my last update, and for that I apologize.  To put up an update tonight would have felt too much like a job, and that’s disgusting.  Plus, I won’t be able to get you a full one until the weekend, so I had to give you something.  Here’s a few links, a picture, and video for dat ass:

– Dunkin’: Here’s every dunk performed at the NBA Slam Dunk competition.  Ever.  (The World’s Best Ever)

– Green and yellow: I missed Lil Wayne’s remix of “Black and Yellow” prior to the Super Bowl.  (Voorhees – this is what you heard on Sunday.)  (The World’s Best Ever)

He said that the psychiatrist thought Alan “believed that babies were delivered by a stork or found under a bush”, and that “sex could give you spots or measles”.

– Snow monster: That’s the translation from Japanese for the effect of rime ice on trees:  (Pink Tentacle)

– Flight paths: Here’s a satellite view of every plane in the sky over a 24 hour period (or something, it just looks real cool, sorry about the song though, that part is unnecessary):  (Kes)

– San Fran trip: After 4 days in San Fran drinkin, watching Zona beat down on nerds and hippies, and then drinkin’ and watching the Super Bowl, I guess I understand why I feel like shit today.  Anyway, the end result of that vacation was Zona being ranked #15 and highlights include me getting my beer pong groove back for 7 straight wins, witnessing a blatant hustle on the BART, passing out two nights in a row, and just enjoying 80 degree weather for the first time in a long time.  Hopefully by Friday a real update will be up.  Maybe Saturday… or Sunday.  Possibly Monday. Or…