– Boxing: How about some animal punching bags?  And gloves and speedbags… yeah.  Be pretty fucked up to walk into someone’s basement and see this shit:

And I’m pretty sure Floyd Mayweather wore these boxing gloves at some point:  (The World’s Best Ever)

– Big Boi: Sir Lucious Left Foot… The Son of Chico Dusty.  New album by Big Boi is really good, the songs “Follow Us” and “Shutterbugg” get stuck easily inside your head (ask Wooten), I also like “Tangerine” with TI and “You Ain’t No DJ“.

Bottom line?  According to Fox News you fund terrorism, you filthy fucker.

– You smell like PUSSY: Bunk thought he was all cool sending me this link to a perfume, Vulva, that mimics the smell of a vagina.  Unfortunately this is old news (easiest/earliest I found was 2007).  Go here to watch a guy sniff a bike seat at a gym.  They have some wallpapers and videos here.  And if you don’t get the “smell like pussy” reference, go here.  (Bunk)

– Mac sells out: McCarthy is a Rangers and Knicks fan, but here he is talking up the Devils and Nets playing at the Prudential Center in Newark.  Watch Cory Booker, mayor of Newark, give some shout outs to microbreweries before Mac comes on to represent at 1:23:  (McCarthy)

– Blind Soccer: Are you not entertained?  (Wired) 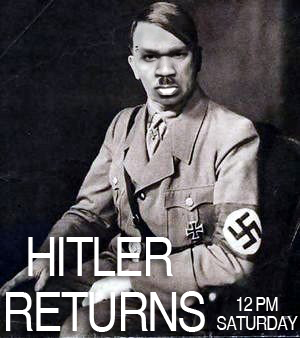 I wish I could say some site was running a “photoshop 50 Cent into any dictator” contest, but I can’t.  The above picture was tweeted by 50 Cent’s verified Twitter account.  He also did an Osama Bin Laden pic, Hannibal Lector, and Saddam Hussein.  Really not sure why, but he’s taken over his Twitter account from his handler and it’s been interesting, obviously.

– The top 50 music videos of the 1990s: According to Pitchfork.  The list is heavy on Spike Jonze, Michel Gondry, and Chris Cunnigham directed videos.  These lists are always fun and always so arbitrary.  (Boing Boing)

– Frog-based electronic noses: Apparently “e-noses” have been around for sometime and are used in food production lines to spot tainted food, but are not 100% accurate.  Scientists at the University of Tokyo have genetically modified cells from a frog to give better accuracy to the e-noses.  (New Scientist)

– Real or fake? In the video below, people were asked about certain aspects of the stimulus package and whether they were real or fake:

Pretty appalling stuff, if you ask me, but you didn’t.  If you are addicted to cigarettes and don’t have a blackberry, you might want to get on that then.  (The article this came from also has some good “unintended consequences” of the stimulus package.)  (Carpe Diem)

– Bus paint job: I would have no problem riding this bus, even though buses are for poor people:  (Dad)