– Boxing: Next week, May 1st, is the Mayweather/Mosley fight.  Of course I’m getting it and of course you’re invited.  For those wondering, I think Mayweather wins by decision, 116-112 (8 rounds to 4).  Why?  Because as Floyd Sr. says, Floyd is “too fast, too smart, too quick, and too clever.”

– Trombone Shorty: Backatown. This is the guy I was hoping to appear on Treme, and he did.  Album came out on 4/20 and I’ve been enjoying it all week.  The only downside is that the songs with lyrics/singing are pretty weak, even though the music behind them is still great.  It’s only around 45 minutes long with 14 songs and is absolutely good music.  My favorites are “Hurricane Season”, “Quiet As Kept”, “Neph”, “Suburbia”, “In The 6th”, and “Where Y’ At”.  Trombone Shorty describes his music as “supafunkrock”.  You will enjoy this album if you have to drive anywhere or are having a party.  Recommended volume is blaring.

– Invisibility cloak closer: We’ve taken one more step towards making a material that can bend light and hide an object.  The technical way to say this is that they designed a “metamaterial with a refined 3-D structure that gives light a negative refraction index upon entering the material.”  Invisibility.  (PopSci)

– Earth Day: “The most significant environmental problems are in the developing world, and that economic growth is the key—not the enemy—of environmental improvement.”  So says Steven Hayward.  He also notes that not one city in America or Europe is ranked in the top 50 most polluted cities, as ranked by the World Bank.  (Carpe Diem)

– Baby pics: Because who doesn’t like pics of babies?  (hongkiat)

– Seeing tongue: A veteran has wires on his tongue that help him “see”, another had a cadaver’s hand transplanted onto his.  Wooten says this last one “gives new meaning to ‘the stranger’.”  (Wooten)

– Top 40 nature photographs of all time: Were recently auctioned off on Earth Day.  They don’t show them all on that link, so go to this Flickr page to see them all.  Here’s one to tease you with:  (Discovery)

– FDA to regulate salt: That’s right.  Processed foods use too much salt, according to the FDA.  Well no shit.  Cheap food has to use salt to make it taste better?  Who knew.  While I’ll never disagree that salt is bad for you,  I do have a major problem with the reasons why the FDA thinks they should regulate the salt.  First off, too much salt can lead to hypertension and heart disease, and everyone by now knows that any health care cost is a “cost to society”.  Considering if you were walking down the street and fell, they’d consider that a “cost to society”, what else will our government start regulating because it’s a “cost to society”?  And how many time can I put “cost to society” in quotes?  Also, according to Cheryl Anderson from Johns Hopkins, “[w]e can’t just rely on the individual to do something.”  Yup, individuals doing whatever they want to their bodies is just unacceptable.  So great, let’s fuck over poor people even more by raising the cost of cheap food as food manufacturers have to find a salt substitute to keep the taste and feel of the food consistent.  Why not just try better disclaimers?  Bunk helped me out by creating this disclaimer for a bag of potato chips: 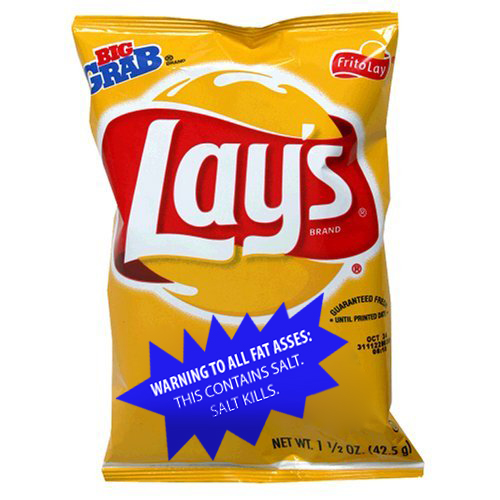 – Fake windows: Take two HDTV’s, some software that can track where one person in the room is so the view changes, and you’ll have Winscape:  (core77 – sorry, Bunk, already saw it before you sent)

– Twitter update: Blake has 36 followers (up from 35).  I’ve kinda been weening myself off of Twitter.  There’s just too much bullshit on it and not enough ways to filter it out.  Do I give a shit that ?uestlove is going to the gym?  No, but if I didn’t follow ?uestlove, then I’d miss out on this next item.

– Tweet of the week: Comes from ?uestlove of the Roots (questlove).  The hotel he was staying at gave him a room already occupied.  Which led to this tweet:

“Imagine being 2 white women. In the privacy of your hotel room. And suddenly a 6″3 afro busts in your hotel door at 3am. #justhappend“

– What you missed: Hot Tub Time Machine.  It’s rare that I go see a movie by myself (this was the second time in my life) but last Sunday I said fuck it and went to the movies.  This movie was not terrible and had a lot of good moments.  Yeah the concept is stupid, corny, whatever, but Rob Corddry is worth the price of admission.  Plus, it’s a time travel movie that has George McFly in it.  How can this suck?

– What I missed: Doctor Who.  At least, 30 of the last 31 seasons.  It’s the longest running sci-fi show in TV history, so you’d think I would A: know about it and B: have watched it.  Nope and nope.  The most I knew about it was that it was about a time traveling doctor.  Wrong.  It’s about an alien life form that protects Earth by traveling through time and space.  The new season, with a brand new doctor, airs on Saturdays on BBC America.  I watched the premiere and was thoroughly entertained.  Bucheri only saw the last half hour (or like 28 minutes since my cable froze right before the end), and was also thoroughly entertained.  So yeah, eventually I’ll get more people into sci-fi shit.  Eventually.